For memorial day weekend I went home to visit with the family before my summer in Nashville started. I hopped in the car on Friday morning after a stop at Barista Parlor and was home by eight that night. One of the reasons why I went home was because of these two: 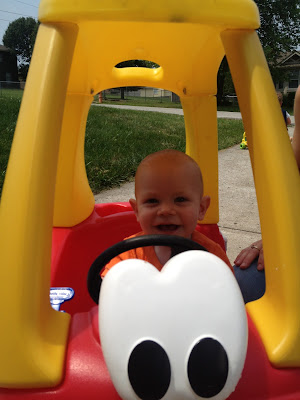 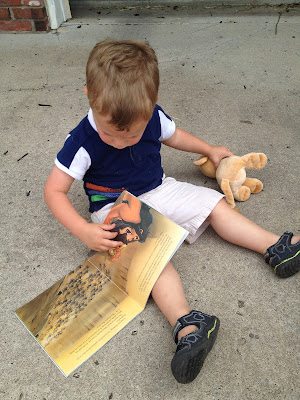 My nephews, Caden and Jacob (or Cade and Jake if you like). They're pretty cute, though I suppose I am a little biased. I really did want to see Mom and Dad before they left for their trip to San Fransisco, and I wanted to see Sam and Melissa and catch up about life. But there is something about hanging out with a two and (almost) one-year-old. And they're boys, which is easy for me.

The most special moment of the trip happened on Sunday as Sam, Melissa, Jake, Cade and myself were on our way down to Springfield for the day. If you've never crammed in a VW Pissat with two other adults and two kiddos than you won't understand the experience. And if you have, I feel for you (At one point Melissa remarked that this was perfect birth control for me, and that I would go back to Nashville and write a blog about the loud car ride to and from Springfield). There was a lull in the conversation between Sam and me and so I did what every adult does in that situation: looked back at the kids (babies are great for this. I don't know how I got through life without a baby to look at when I didn't know what to say to someone). Jake was being like his dad, loud. He wasn't fussy (yet), he was just having a really good time hollering about something. I looked back, pursed my lips and pressed my finger to them, shut my eyes tight, and said "shhhhh!!!!" He giggled, probably (correctly) thinking that Uncle Luke was being silly. Cade looked over at Jake giggling and did the same. We went back and forth a couple of times: Uncle Luke "shhhhhh-ing," Jake giggling, Cade giggling.

Out of all the things that happened that weekend, all the conversations I had, this is the event that has stuck with me. The word I think of when I think about when I think about this time, about any time with my nephews is a simple, old one:

After thinking about that for a while I started asking myself another question:

Why don't I play anymore?

I don't call my friends up and say, "You wanna go out and play?" Because they'd probably think I was a little crazy. Or their response would be, "Play what?" And I wouldn't have much of a response to that. But is it a problem that they would respond that way? I don't think so. Deep within my heart I have a yearning to splash around creeks, tromp through the woods, bloody up knees and elbows, and come home as the sun is setting. I don't know if it needs to be planned out, or if there needs to be deep meaning attached to it. I simply want to play.

Part of me is thinking that this may just be me trying to avoid the trials of adulthood, but another part is telling me that I'm merely trying to simplify what I call adulthood. To let life be life, and to live it.

What Luke Has Written: